The gage pattern refers cumulatively to the shape of the grid, the number and orientation of the grids in a multiple-grid gage, the solder tab configuration, and various construction features which are standard for a particular pattern. Torque measurement is a very common application, used to measure engine power output on propshafts and driveshafts, driver input through steering wheels, tightening bolts, or anywhere a component is subjected to a twisting force.

When the shaft is loaded in torsion, it creates a state of pure shear and the applied torque can be found by orienting rosettes where the gridlines are positioned at 45 degrees to the axis of the shaft.  Some common applications can be found in pulp and paper mills for measuring efficiency, output shafts for large ships for optimum engine setup, and even power monitoring for cyclists so they can determine how much energy was expended during training, and, of course, there are many others.   For most of the these applications, the strain gages are used to construct a full Wheatstone bridge circuit to double the sensitivity to torque and cancel unwanted effects due to axial or bending load components. 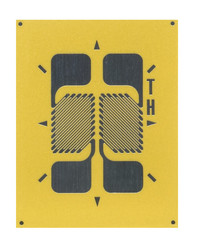 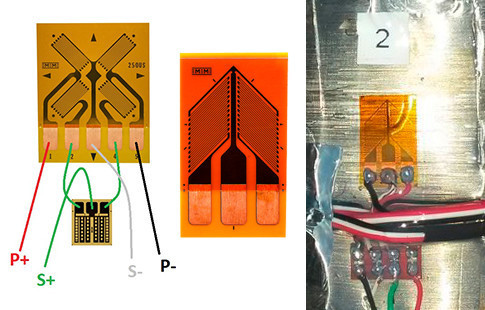 Torque loads cause shear strain in the structure to which the torsional loads are being applied. This is a good thing, because strain gages can measure these shear strains. That's actually not a precisely true statement. Bonded electrical resistance strain gages do not respond to pure shear strains. Fortunately, associated with all shear strains are two normal components of strain, tension and compresion, which strain gages easily sense. This is why it takes two strain gage sensing grids to resolve one shear strain value. For mathematical convenience, these grids are normallyoriented at ±45° to the measurement direction (90° between the two grids), allowing the gage, when properly connected to a strain indicator instrument, to directly display strain magnitude. But, the grids could be oriented at any relative to one another and the shear strain casn be calculated.

Torque transducers provide a convenient way of measuring torque-loads being applied to a structure, shaft, bolt, door knob, and so on. The sensor used in many high quality torque transducers is a Micro-Measurements Transducer Class shear-strain gage. These precision measuring devices allow designers to optimize structures for anticipated loads.

FOR OUR FULL RANGE OF OUR STRESS ANALYSIS SHEAR PATTERN 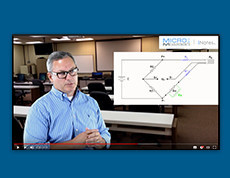 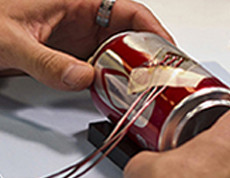 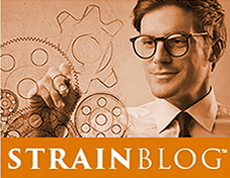 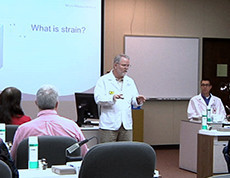